Sometimes I use strength training as my main form of exercise for the day.  On those days a strength workout is usually a 30-45 minute, sweaty, panting, full-body affair complete with high intensity exercises that make my muscles quake and my heart rate soar.

Other days strength training is more about maintenance and on those days my routine can be as short as 10 minutes.

Here’s a look at a typical Fast and Efficient Strength Workout, Gracefulfitness style.

Push ups.  Slow and steady with tons of focus on form.  Push ups are a great warm up exercise.  I usually start a little shallow and maybe on my knees then begin to go deeper as my shoulders and back warm up. 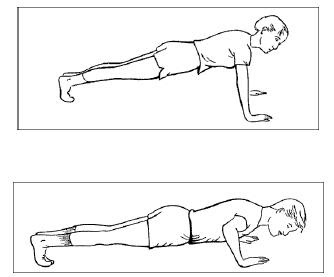 (source)
Do each exercise for about a minute then move on to the next exercise.  Complete twice for a full body workout in about 10 minutes.
Finish with a few stretches for the hamstrings, quadriceps, hips, shoulders, and triceps.
Whether you strength train for 10 minutes or 100 minutes you are boosting your metabolism in two ways.  First, muscle requires more energy than fat does so the higher percentage of muscle you have the more calories you must eat to maintain.  Second, strength training  takes calories to recover from, so for about 24 hours after a lifting session your calorie needs are elevated.
Strength training is increasingly important for anyone over 25, as it gets harder and harder for the body to build and maintain muscle with each passing year.
P.S this routine is not easy but is appropriate for beginner strength trainers if you use light weights, light repetitions (8-12), and focus on form above all else.  It can be made harder by using heavy-for-you weights, working on each exercise for a full minute, and maybe adding in any progressions you may know.
P.P.S Of course, you should always consult with your doctor/use your own common sense when approaching any new exercises.

I high-fived a fellow runner!

My “Praise Your Fellow Runner” mission started back in October.  Since then I haven’t written much about it but I have continued to give huge grins, thumbs up, and “great job” encouragement to every runner I pass.

But I was still working up the nerve to go in for the high five.

The stars must have been aligned on todays run.  Tate and I had already passed this one women a few times (more on that later) and she had given an open smile in response to my grin so I had a hunch she would be receptive.

As we approached each other I worked my way into position.  Then I gave her a heads up by putting my hand up a few strides ahead of time and…

The best part was, she high fived Tate as she passed him just after me!

It was a good run.

We did the Monticello-Saunders Trail, which is an awesome 4 mile up and back (you may recall it from Thursday’s post).  At the turn around point Tate and I had the following conversation.

She said: Sometime I want to run this route twice.  I think it would be an easy 8 miles because your last two miles are downhill.

He said: Want to do it today?

She said: Kinda, not really.

A mile later we stuck a compromise.  We decided to turn around and head back up a 1/2 mile from the parking lot.

This was an excellent idea because

I was a little overdressed but overall it was perfect!

The 7 miles took us 64 minutes and that includes a few minutes of walking on the second time up.

My  pre-run strength and Pilates workouts came courtesy of Exercise TV.  Both workouts were super straight forward (a little boring) but challenging.

The 10 minute Pilates routine can be found here.  It is definitely an intermediate workout.  It’s fast paced and challenging but nothing more than the basic 6 or so Mat Pilates moves (very few variations).

The 20 minute strength workout can be found here.   Although the workout is kinda boring, I did really appreciate the trainers language and explanations of exercises.  I am going to start using the cue to “blow yourself away from the floor” when doing a push-up in my classes!  It’s a great reminder to exhale during the exertion and provides awesome imagery to help make it a little easier.  Also, his “baby biceps-big biceps” (or something close to that) curl is killer!  You’ll have to do the workout to find out for yourself. 😉